Middlesboro, Cumberland, Ky--At first glance, Southeast graduates Destanie Hatmaker and Tom Busic have little in common. Homeschooled throughout her high school years, Destanie enrolled on the Cumberland Campus of SKCTC shortly after graduation. Tom enrolled at the Middlesboro Campus while he was still employed full time with the Middlesboro Police Department. However, 23-year-old Destanie and Tom, who turns 50 this year, both tell stories of Southeast success.

Destanie had dreamed of becoming a nurse since the age of 13 when her grandparents were both hospitalized for separate illnesses.

“I was impressed by the professionalism and level of care that my grandparents received at ARH,” she said. “I watched those nurses closely, and I knew that I wanted to be like them one day.”

Tom, on the other hand, first began his career in health care after earning a short-term credential as a certified respiratory therapy technician (CRTT) from Cumberland Valley Health Occupations Center—now the SKCTC Pineville Campus.

“I had always been intimated by the thought of college,” he said. “Also, no one around me ever encouraged me to go.”

Busic worked for six years in respiratory care, several of those in Daytona, Florida, where his wife Kristie pursued a degree in radiation therapy. After the couple returned to Middlesboro, Tom tried several jobs, including work as a CRTT for the rescue squad and training bloodhounds. In 2000, he passed the Middlesboro Police Department’s entrance exam and began what would be his career for the next 20 years.

“My father had retired as a police officer, and I wanted to find work that would offer benefits and a solid retirement plan,” said Tom.

According to Destanie, she intended to get her basics at Southeast before transferring somewhere else for her nursing degree. Once she became familiar with the program, she knew that Southeast was the right place for her.

“Southeast has a competitive, highly regarded Nursing program,” she said. “And my instructors were amazing. I felt they were definitely in my corner.”

Tom, on the other hand, finished his career in law enforcement while taking general education courses part time. He retired as chief of police from the MPD and was accepted into Southeast’s nursing program in fall 2020.

“You would think it would be a big change, but it’s really not. As an officer, I always enjoyed helping people, and I knew this would give me an opportunity to help them, just in a different way,” he said.

As nursing students, Tom and Destanie persisted despite challenges their program faced during the pandemic.

“Our clinical schedules were altered because of COVID,” said Destanie. “But eventually, I was able to work with many of the actual COVID patients. I felt like I could make a difference for people.”

In May, not only did Destanie and Tom both graduate with an Associate of Applied Science in Nursing from Southeast, but they were recognized as the top nursing students for the Cumberland and Middlesboro campuses, respectively. Tom has accepted a position at Barbourville ARH, and Destanie will soon begin working for Baptist Health in Corbin.

When asked what advice they would give to someone considering the program, they both offer encouragement.

“It’s never too late,” said Tom. “I was older than my classmates and even some of my professors. But that didn’t bother me. They knew I was serious and there to learn. As my advisor, Dr. Omar really cheered me on.”

“Don’t give up,” said Destanie. “Your instructors are there to help you. Join a study group. Lean on those around you—it’s not wrong to lean on others.”

For information about the Nursing program at Southeast, please contact Nursing Director Dr. Melissa Humfleet at (606) 589-3096 or visit https://kctcs.co/3taopav. 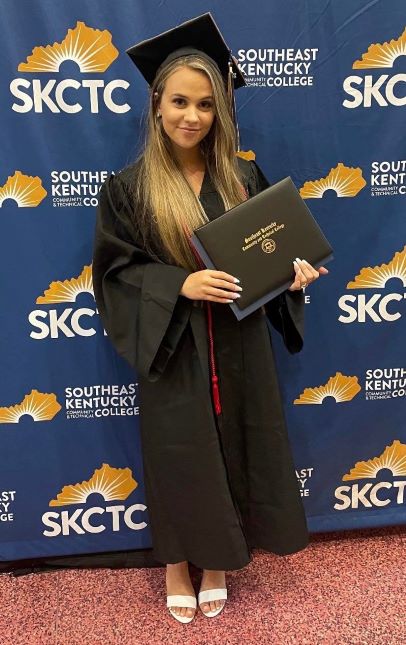 Destanie Hatmaker graduated from Southeast with her associate in applied science and associate in science degrees. 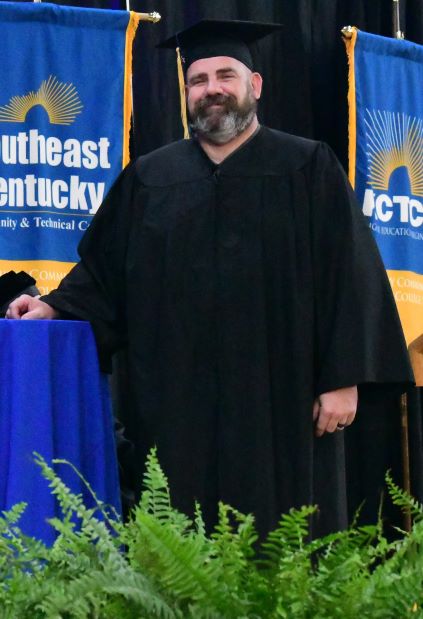 Tom Busic received an RN degree after 20 years with the Middlesboro Police Department.